A Tennessee Wholesale Nursery Reviews From A Customer In North Carolina

Hi! I just wanted to share my experience with TN Nursery. It was my second time purchasing from them, and when I emailed them for clarification and guidance, they replied immediately. My bird’s foot violets are thriving well, and they look perfect on my lawn. Keep up the excellent work!
Keesha Johnson – Durham, NC 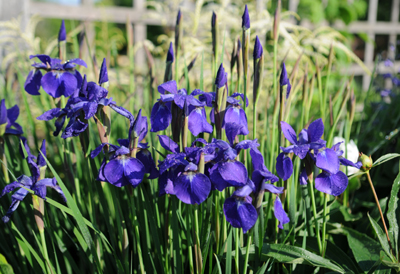 The genus Viola comprises flowering plants from the violet family Violaceae, the largest genus in the family containing between five hundred twenty-five to six hundred species. While most species appear in the temperate Northern Hemisphere, some appear in widely divergent areas such as the Andes, Australasia, and Hawaii. In addition, some species may be perennial plants, some may be annual, and some tend to grow as small shrubs. In horticulture, the term "pansy" refers to large, colorful cultivars raised annually or biennially from seeds and used extensively in bedding. Likewise, the terms "viola" and "violet" usually refer to smaller annual or perennial flowers, including undomesticated species.

The bird's foot violet is native to sandy areas in Central America and North America. Formally known as Viola Pedata, a bird's foot violet is a clumped perennial variation that may grow four to ten inches high. The common name comes from the shape of the leaves as they resemble a bird's foot. The plant has basal leaves that are pinnately divided, first into three main sections, with large, almost pansy-sized flowers. Each part divides into three to five toothed lobes, but the lobes may be somewhat linear with rounded tips. The leaflets are smaller toward the leaf's base and broader near the end, but the full foliage on a slender stalk is directly rising from the root. The outer leaves, however, have shorter stalks than the inner leaves. Color is medium green, without hair on either surface.

The bird's foot violet flowers range from pale to dark purple and have five petals. The two upper petals are smaller than the lower three petals, and they are deep violet. The center lower petal also has a white patch in the throat, lined with dark purple lines that are nectar guides for insects. This petal is also the longest with a spur on its back, and there are five stamens with brilliant orange anthers.

Gardeners would usually grow the bird's foot violet in groups along pathways, rock gardens, or slopes. While it is challenging to grow compared to the other varieties of violets, it can self-seed in optimum growth conditions—and in North Carolina, one can naturally find bird's foot violets in dry, rocky, or sandy woodlands and road banks. At the same time, one can spot the ranuncuilfolia around the sandhills.

Tennessee Wholesale Nursery Reviews are 4.8 out of a possible 5 Stars.

Going further to the violet's origin would be the pansy. The pansy is any several popular cultivated violets with four hundred to six hundred species of the family Violaceae. Pansies have developed for long periods under such diverse conditions, and in such a variety of forms, their origin has become uncertain. The numerous forms with their striking differences in appearance are domestication products—some examples include the garden pansy and the tufted pansy or the horned viola. A short-lived perennial or annual that grows around fifteen to thirty centimeters, heart-shaped or rounded leaves sprout from the base, and oval leaves grow from the stems. The plant's velvety flowers, which occur in blue, yellow, and white combinations, are around one to two inches across and have five petals each. The garden pansy, for instance, grows best in rich soil in a damp, cool climate. Meanwhile, the wild pansy has widely naturalized in North America—flowers of this form are usually purple and yellow and less than two centimeters across.

The blotch pansy is arguably the most popular of pansy varieties for the other pansies, as the flower petals have vibrant colors ranging from yellow to blue to red, with a dark purple "blotch" on their faces. These flowers grow relatively close to the ground, with short stems leading to bright splotches of color peeping out to other flowers or just overground cover. Another variation would be the clear pansy, known as such because of the lack of faces, but only one uniform color. Bred by a Scottish grower in the late 1800s then sent overseas, they became the most popular flower in North America. People celebrate them to this day because their appeal makes the flowerbed look like a cutout of a watercolor painting. The mammoth pansy, bred to stand out and be the garden's highlight, is known for its size and its burst of color. Their robust stems stretch an average of six to eight inches off the ground, and the pansy's roots branch out to quickly fill up a pot or a garden bet. Finally, the whiskers pansy, aptly named for its delicate trim lines that fan out of its petals and resemble animal whiskers, had only been found in open fields until recently when agriculturists discovered how to create the design through hybridization. This specific pansy comes in a medium size that varies depending on the color. The purplish-white, white and yellow hues grow an average of two-and-a-half to three inches for each bloom, while light-blue, orange, and red-gold are slightly smaller at two to two-and-a-half inches.

Thanks, Tn. I love you and your plants. Those girls are so nice to us when we call. You all are true southern treasures.

For Coupons and More